You are here: Home1 / Respiratory System

Respiration is the sequence of events that results in the exchange of oxygen and carbon dioxide between the atmosphere and the body cells. Every 3 to 5 seconds, nerve impulses stimulate the breathing process, or ventilation, which moves air through a series of passages into and out of the lungs. After this, there is an exchange of gases between the lungs and the blood. This is called external respiration. The blood transports the gases to and from the tissue cells. The exchange of gases between the blood and tissue cells is internal respiration. Finally, the cells utilize the oxygen for their specific activities. This is cellular metabolism, or cellular respiration. Together these activities constitute respiration.

Ventilation, or breathing is the movement of air through the conducting passages between the atmosphere and the lungs. The air moves through the passages because of pressure gradients that are produced by contraction of the diaphragm and thoracic muscles.

Atmospheric pressure is the pressure of the air outside the body.

Intraalveolar pressure is the pressure inside the alveoli of the lungs.

Intrapleural pressure is the pressure within the pleural cavity.

These three pressures are responsible for pulmonary ventilation. 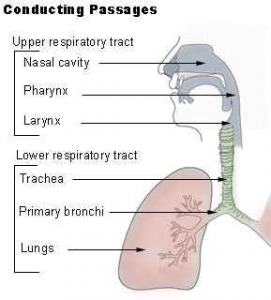 Nose and Nasal Cavities
The framework of the nose consists of bone and cartilage. Two small nasal bones and extensions of the maxillae form the bridge of the nose, which is the bony portion. The remainder of the framework is cartilage and is the flexible portion. Connective tissue and skin cover the framework. 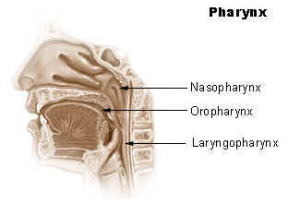 Pharynx
The pharynx, commonly called the throat, is a passageway that extends from the base of the skull to the level of the sixth cervical vertebra. It serves both the respiratory and digestive systems by receiving air from the nasal cavity and air, food, and water from the oral cavity. Inferiorly, it opens into the larynx and esophagus. The pharynx is divided into three regions according to location: the nasopharynx, the oropharynx, and the laryngopharynx (hypopharynx).

The upper part of the pharynx (throat) lets only air pass through. Lower parts permit air, foods, and fluids to pass.

The pharyngeal, palatine, and lingual tonsils are located in the pharynx. They are also called

Waldereyer’s Ring.
Layrynx
The larynx, commonly called the voice box or glottis, is the passageway for air between the pharynx above and the trachea below. It extends from the fourth to the sixth vertebral levels. The larynx is often divided into three sections: sublarynx, larynx, and supralarynx. It is formed by nine cartilages that are connected to each other by muscles and ligaments.

In the mediastinum, at the level of the fifth thoracic vertebra, the trachea divides into the right and left primary bronchi. The bronchi branch into smaller and smaller passageways until they terminate in tiny air sacs called alveoli.

The cartilage and mucous membrane of the primary bronchi are similar to that in the trachea. As the branching continues through the bronchial tree, the amount of hyaline cartilage in the walls decreases until it is absent in the smallest bronchioles. As the cartilage decreases, the amount of smooth muscle increases. The mucous membrane also undergoes a transition from ciliated pseudostratified columnar epithelium to simple cuboidal epithelium to simple squamous epithelium. 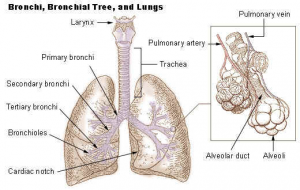 Lungs
The two lungs, which contain all the components of the bronchial tree beyond the primary bronchi, occupy most of the space in the thoracic cavity. The lungs are soft and spongy because they are mostly air spaces surrounded by the alveolar cells and elastic connective tissue. They are separated from each other by the mediastinum, which contains the heart. The only point of attachment for each lung is at the hilum, or root, on the medial side. This is where the bronchi, blood vessels, lymphatics, and nerves enter the lungs.

The right lung is shorter, broader, and has a greater volume than the left lung. It is divided into three lobes and each lobe is supplied by one of the secondary bronchi. The left lung is longer and narrower than the right lung. It has an indentation, called the cardiac notch, on its medial surface for the apex of the heart. The left lung has two lobes.

Each lung is enclosed by a double-layered serous membrane, called the pleura. The visceral pleura are firmly attached to the surface of the lung. At the hilum, the visceral pleura is continuous with the parietal pleura that lines the wall of the thorax. The small space between the visceral and parietal pleurae is the pleural cavity. It contains a thin film of serous fluid that is produced by the pleura. The fluid acts as a lubricant to reduce friction as the two layers slide against each other, and it helps to hold the two layers together as the lungs inflate and deflate.

PATHOLOGICAL CONDITIONS
Croup: Acute respiratory syndrome in children and infants characterized by obstruction of the larynx barking cough and strider.

Diphtheria: Acute infection of throat and upper respiration tract caused by chorine bacterium diphtheriae. It forms a leathery opaque membrane in the pharynx or in the respiratory tract causing an obstruction in the airflow, which may lead to health.

Pertusis: A bacterial infection of pharynx, larynx and trachea caused by bardetella pertusis, a highly contagious bacterium with woofing cough.

Asthma: Spasm and narrowing of the bronchus leading to bronchial airway obstruction caused by an allergen, gives paroxysmal (sudden) dyspnea, wheezing, and cough.

Chronic bronchitis: inflammation of the bronchi persisting from a long time due to infection or cigarette smoking leading to accumulation of mucus in bronchioles and COPD.

Pneumonia: Acute inflammation & infection of alveoli filling with pus in the lungs.

Pulmonary edema: Swelling and fluid collection in the air sacs and in the bronchioles in cases of congestive heart failure.

Pulmonary embolism: It is a process of obstruction of blood vessel by emboli like fats, clots, air, a chemical, leading to death of the pulmonary tissue called as pulmonary infraction.

ALLERGIC RHINITIS
Allergic rhinitis may be defined as the inflammation of nasal mucosa brought about by airborne pollens that react to release histamine. In other words, when some people breathe pollens that are in the air, the pollens cause histamine to be released. The excess of histamine in the body causes nasal mucosa to become inflamed. Causes of allergic rhinitis, more common during the warmest months of the year, include hay fever and allergic disorders which are common during seasons when the pollen count is high. Allergic rhinitis is also caused by house dust, occupational dust, molds, and animal dander (feathers, wool in blankets). Certain foods and drugs cause allergic rhinitis symptoms; sometimes bacteria cause this problem. The symptoms include:

Signs and symptoms of acute paranasal sinusitis are like those of acute rhinitis but are more severe. Included are headache, worse during the day; facial and tooth pain; tenderness over the sinuses; and fever and chills. There may be chronic recurrences of these signs and symptoms along with postnasal drip.

COMMON COLD
The common cold is a contagious, viral infection of the upper respiratory tract. The cold is usually caused by a strain of rhinovirus. Over ninety distinct strains of rhinovirus are known to cause the common cold. Although not everyone is susceptible to infection from a cold virus, this respiratory infection occurs more often than all other diseases combined. Whether or not a person develops a cold after being exposed to a cold virus is determined to some extent by the person’s general health. Fatigue, chilling of the body, wearing wet clothes and shoes, and the presence of irritating substances in the air make it more likely that the person will develop a cold.

These are signs and symptoms of the common cold:

Common signs and symptoms are listed below. A complication may be a secondary infection.

Tonsillitis: Tonsillitis is a painful disease caused by bacteria or viruses that infect one or both of the palatine tonsils. People between the ages of ten and forty have the majority of tonsillitis attacks.

Strep throat: Strep throat is an infectious disease that affects the membranes of the throat and tonsils. This disease is also called septic sore throat, acute streptococcal pharyngitis, and acute streptococcal tonsillitis. The disease is caused by group A beta-hemolytic streptococci bacteria. It spreads from person to person through droplets of moisture sprayed from the nose and mouth. Some people only carry the bacteria. These carriers exhibit no symptoms themselves but spread the disease.

PLEURITIS
Pleuritis is an inflammation of the pleural lining, a lining that covers the lungs and the chest cavity. The two surfaces of this lining are moist and allow the lungs to move smoothly over the chest wall when a person breathes. The surfaces of the lining become dry and rough and rub together when the pleura lining is inflamed. This condition, called pleurisy or pleuritis, is very painful and becomes more painful when the person breathes deeply or coughs. Most cases of pleuritis occur as complications of some other respiratory condition such as pneumonia, tuberculosis, or another infectious disease. The underlying disease must be treated in order to cure the pleuritis.

Signs/Symptoms: Pleuritis signs and symptoms include the following:

PNEUMONIA
Pneumonia is an acute infection of the alveoli spaces of the lungs. Causes of pneumonia include injury to the respiratory mucosa with pneumonia as a secondary infection, influenza, common colds, and bronchitis.

There are three types of pneumonia: bacterial; mycoplasmal (bacteria having no cell wall and bounded by a triple-layered membrane); viral. Bacterial pneumonia is further subdivided into these types: pneumococcal; staphylococcal; klebsiella (Friedlander’s bacillus); streptococcal; and influenza bacillus.

Hyperventilation:
Hyperventilation, a common response to phsychological stress, is a condition that develops as a result of an individual breathing too deeply and too rapidly. Blood pH (hydrogen ion) is raised above normal, and the body experiences alkalosis (a condition in which the blood pH is between 7.45 and 8.00). By breathing as rapidly as possible for three to five minutes, a person can bring on the signs and symptoms of hyperventilation deliberately.

Chronic Obstructive Pulmonary Disease
COPD is a term that refers to a group of lung diseases that can interfere with normal breathing. It is estimated that more than 16 million Americans suffer from COPD. It is the fourth leading cause of death in the US.

What are the different types of COPD?
The two most common conditions of COPD are chronic bronchitis and emphysema. Some physicians agree that asthma should be classified as a chronic obstructive pulmonary disease, while others do not.

Lung Cancer
Lung cancer is cancer that usually starts in the lining of the bronchi, but can also begin in other areas of the respiratory system, including the trachea, bronchioles, or alveoli. It is the leading cause of cancer death in both men and women. In 2007, 213,380 new cases of lung cancer are expected, according to the American Cancer Society.

Lung cancers are believed to develop over a period of many years.

Nearly all lung cancers are carcinomas, a cancer that begins in the lining or covering tissues of an organ. The tumor cells of each type of lung cancer grow and spread differently, and each type requires different treatment. More than 95 percent of lung cancers belong to the group called bronchogenic carcinoma.