You are here: Home1 / Musculoskeletal System

Skeletal System: Bones and joints form the skeletal system of the body.  Bones provides a framework which protects and supports internal organs. They also provide attachments to the muscles. Because of the contraction of the muscles mobility is possible. The inner core of the bone consists of bone marrow where blood cells are manufactured.

CLASSIFICATION OF BONES
Bones of the skeletal are classified as:

Gross structure of a long bone: A long bone has two ends (epiphysis) connected by a shaft (diaphysis). The outer membrane covering the bone is periostem. It is followed by a thick layer of compact bone. Inside this is a central medullary canal. Nutrient foramen is the opening through which arteries pierce the medullay canal.

DEVELOPMENT AND GROWTH OF BONES

Formation of the bones is called OSSIFICATION. Bones of the skeleton are developed in two ways:

In both cases, bone cells called osteoblast invade the area of ossification. Here, calcium salts are deposited to give the necessary hardness. This process of bone development occurs before birth. After birth, the bone grows from certain centers in it. The centre in the shaft is called diaphysis. The two centers in the ends are called epiphysis. The layer of cartilage in between the epiphysis and diaphysis is called epiphyseal cartilage or growth plate. This is form a single bony structure.  After this, the growth of bone stops. Osteoclasts are bone phagocytes which help in reabsorption of bone and bone remodeling.

BONES OF HUMAN SKELETON
A total of 206 bones form the human skeleton. These bones can be classified as:

Bones of cranium
Cranium is formed by 8 bones. They are:

Sutures of the cranium: Sutures are the immovable joints which unite the bones of skull. The important sutures are:

The fontanelle: At birth, skull bones of the child are not completely ossified. The space between the bones is filled by membranes. These membranes at the angles of bones are called fontanelles. These fontanelles are:

BONES OF THE FACE
The bones which make the face are 14 in number. These bones are:

BONE OF WRIST AND HAND 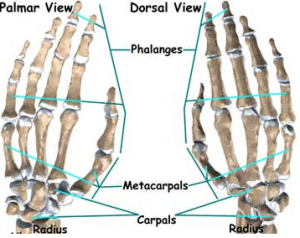 Bones of wrist: The bones of carpus or wrist are arranged in two rows.

First or proximal row made of scaphoid, lunate, triquetrum, and pisiform bones.

Second or distal row made of trapezium, trapezoid, capitate, and hamate bones.

Bones of fingers: They are made of phalangeal bones. These are long bones. The thumb has two phalanges. Other fingers have three phalanges. They are proximal, Middle and distal phalanges.

Sternum: It is also called breast bone. It is a flat bone which is divided into three parts- namely manubrium sterni, body of sternum, and xiphoid bone.

Manubrium sterni: It is the upper part, which is triangular in shape. It contains:

Xiphoid bone (Ensiform process): It lies in the lowest part of sternum.

Ribs:
They are arranges in twelve pairs. On the back side, all of them attached to thoracic vertebrae. Depending on their attachment in the front they are classified as: 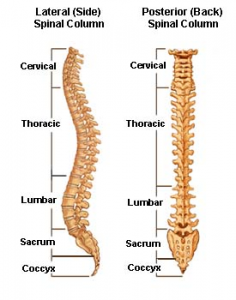 Classification of vertebrae: According to the region they occupy, the vertebrae are classified as:

BONES OF THE PELVIC GIRDLE
The pelvic girdle is the connection between the trunk and lower extremities. It is formed by:

Nominate bone:  It is made of three parts namely ilium, ischium, and pubis. All these three bones unite to form large cup shaped cavity on the outer surface called acetabulum.

Ilium: It is upper expanded and flat part of innominate bone.

Pubis: It is the front portion of innominate bone.

Ischium: It is the solid, broad portion at the lower and back part of innominate bone.

BONES OF FOOT
Bones of foot can be classified as:

Metatarsal bones: They are five in number. They correspond with the five toes. All of them are long bones.

Phalanges: They are 14 bones, two for the first toe and tree of the rest.

JOINTS:
A joint is the location at which two or more bones make contact.  They are constructed to allow movement and provide mechanical support, and are classified structurally and functionally.
Synovial joints (or diarthroses, or diarthroidal joints) are the most common and most moveable type of joints in the body. As with all other joints in the body, synovial joints achieve movement at the point of contact of the articulating bones. Structural and functional differences distinguish the synovial joints from the two other types of joints in the body, with the main structural difference being the existence of a cavity between the articulating bones and the occupation of a fluid in that cavity which aids movement.

Achondroplasia:
An abnormality in the development of cartilage results in dwarfism. In some cases it is familial but in some it may be due to chromosome abnormalities. In person suffering from achondroplasia menta, sexual and reproductive development is normal.

Osteoporosis:
Osteoporosis is a condition characterized by the loss of the normal density of bone, resulting in fragile bone. Osteoporosis leads to literally abnormally porous bone that is more compressible like a sponge, than dense like a brick. This disorder of the skeleton weakens the bone causing an increase in the risk for breaking bones (bone fracture).

Osteomalacia:
A disease characterized by a gradual softening and bending of the bones with varying severity of pain; softening occurs because the bones contain osteoid tissue that has failed to calcify because of lack of vitamin D or renal tubular dysfunction; more common in women than in men, osteomalacia often begins during pregnancy.

Rickets:
A disease due to vitamin D deficiency and characterized by overproduction and deficient calcification of osteoid tissue, with associated skeletal deformities, disturbances in growth, hypocalcemia, and sometimes tetany; usually accompanied by irritability, listlessness, and generalized muscular weakness; fractures are frequent

Fractures are classified as Simple fractures and compound fractures.

Possible methods of fracture treatment are

Osteomyelitis
Osteomyelitis is an infection of bone and bone marrow, usually caused by pyogenic bacteria or mycobacteria. It can be usefully subclassified on the basis of the causative organism, the route, duration and anatomic location of the infection.
Types of Osteomyelitis:

Treatment includes broad spectrum antibiotics and rest; sometimes surgery may be required to drain the pus.

TUMORS OF THE BONE
Osteogenic sarcoma:
Malignant tumor of the bone in which the malignant cells directly form bone tissue. Genetic, constitutional and environmental influences may be predisposing factors.
These tumors usually arise at the ends of long bones (distal/proximal femur and proximal humerus). They spread (metastasize) via the blood steam, more commonly to the lungs.
Clinical features include local pain, tenderness and swelling. Treatment includes surgery.

Ewing’s Sarcoma:
This malignant tumor usually arises in children between the ages of 5 and 15. It usually develops in the shaft of the bone. Clinical features include painful enlarging mass, often tender, warm and swollen. With combined radiation, chemotherapy, and surgery there are 75 percent chances of survival.

Rheumatoid arthritis:
Rheumatoid arthritis (RA) is traditionally considered a chronic, inflammatory autoimmune disorder that causes the immune system to attack the joints. It is a disabling and painful inflammatory condition, which can lead to substantial loss of mobility due to pain and joint destruction. RA is a systemic disease, often affecting extra-articular tissues throughout the body including the skin, blood vessels, heart, lungs, and muscles.

Ankylosing spondylitis:
Chronic inflammatory joint disease of vertebrae and sacroiliac joints that usually occurs in males. Cause is supposed to be of autoimmune in origin. Symptoms are low backache, stiffness of movements of back. At later stages all the joints may be involved. Treatment includes steroid and analgesics.

Gouty arthritis:
Inflammation of joints due to excessive production of uric acid (is the end product of nucleic acid metabolism) in the body.
Uric acid, which is in excess in the body, accumulates in the joints evoking in inflammatory response which destroys the articular cartilage and synovial membrane, the chief joint affected in big toe.
Clinical features during an acute attack include joint pain, fever and malaise.

Bursitis:
The fluid filled synovial cavities enclosed by capsule is called Bursa.
Inflammation of the bursa is called bursitis.  The most common bursae involved are subdeltoid bursa, olecranon bursa and prepatellar bursa.

Ganglion:
Small multiloculated cystic lesion found in the connective tissues of joint capsule or tendon sheaths. Treatment is aspiration of the fluid or removal of the cyst.

Carpel tunnel syndrome:
Carpal tunnel syndrome (CTS) or Median Neuropathy at the Wrist is a medical condition in which the median nerve is compressed at the wrist, leading to pain, paresthesias, and muscle weakness in the forearm and hand. A form of compressive neuropathy, CTS is more common in women than it is in men, and, though it can occur at any age, has a peak incidence around age 42. The lifetime risk for CTS is around 10% of the adult population.
Most cases of CTS are idiopathic – without known cause. Repetitive activities are often blamed for the development of CTS, along with several other possible causes. However, the correlation is often unclear.

Systemic lupus erythematosus:
Systemic lupus erythematosus (SLE or lupus) is a chronic autoimmune disease that can be fatal, though with recent medical advances, fatalities are becoming increasingly rare. As with other autoimmune diseases, the immune system attacks the body’s cells and tissue, resulting in inflammation and tissue damage. SLE can affect any part of the body, but most often harms the heart, joints, skin, lungs, blood vessels, liver, kidneys and nervous system. The course of the disease is unpredictable, with periods of illness (called flares) alternating with remission. Lupus can occur at any age, and is most common in women, particularly of non-European descent. Lupus is treatable symptomatically, mainly with corticosteroids and immunosuppressants, though there is currently no cure. However, many people with Lupus lead long and substantial lives.