The male reproductive system, like that of the female, consists of those organs whose function is to produce a new individual, i.e., to accomplish reproduction. This system consists of a pair of testes and a network of excretory ducts (epididymis, ductus deferens (vas deferens), and ejaculatory ducts), seminal vesicles, the prostate, the bulbourethral glands, and the penis. 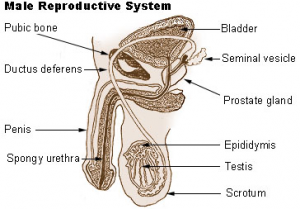 Testes
The male gonads, testes, or testicles, begin their development high in the abdominal cavity, near the kidneys. During the last two months before birth, or shortly after birth, they descend through the inguinal canal into the scrotum, a pouch that extends below the abdomen, posterior to the penis. Although this location of the testes, outside the abdominal cavity, may seem to make them vulnerable to injury, it provides a temperature about 3° C below normal body temperature. This lower temperature is necessary for the production of viable sperm. The scrotum consists of skin and subcutaneous tissue. A vertical septum, or partition, of subcutaneous tissue in the center divides it into two parts, each containing one testis. Smooth muscle fibers, called the dartos muscle, in the subcutaneous tissue contract to give the scrotum its wrinkled appearance. When these fibers are relaxed, the scrotum is smooth. Another muscle, the cremaster muscle, consists of skeletal muscle fibers and controls the position of the scrotum and testes. When it is cold or a man is sexually aroused, this muscle contracts to pull the testes closer to the body for warmth.

Structure
Each testis is an oval structure about 5 cm long and 3 cm in diameter. A tough, white fibrous connective tissue capsule, the tunica albuginea, surrounds each testis and extends inward to form septa that partition the organ into lobules. There are about 250 lobules in each testis. Each lobule contains 1 to 4 highly coiled seminiferous tubules that converge to form a single straight tubule, which leads into the testis. Short efferent ducts exit the testes. Interstitial cells (cells of Leydig), which produce male sex hormones, are located between the seminiferous tubules within a lobule.

Spermatogenesis
Sperm are produced by spermatogenesis within the seminiferous tubules. A transverse section of a seminiferous tubule shows that it is packed with cells in various stages of development. Interspersed with these cells, there are large cells that extend from the periphery of the tubule to the lumen. These large cells are the supporting, or sustentacular cells (Sertoli’s cells), which support and nourish the other cells.

Early in embryonic development, primordial germ cells enter the testes and differentiate into spermatogonia, immature cells that remain dormant until puberty. Spermatogonia are diploid cells, each with 46 chromosomes (23 pairs) located around the periphery of the seminiferous tubules. At puberty, hormones stimulate these cells to begin dividing by mitosis. Some of the daughter cells produced by mitosis remain at the periphery as spermatogonia. Others are pushed toward the lumen, undergo some changes, and become primary spermatocytes. Because they are produced by mitosis, primary spermatocytes, like spermatogonia, are diploid and have 46 chromosomes. 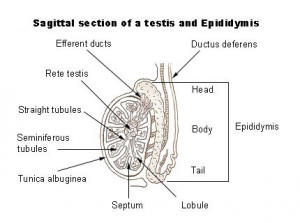 Duct System
Sperm cells pass through a series of ducts to reach the outside of the body. After they leave the testes, the sperm passes through the epididymis, ductus deferens, ejaculatory duct, and urethra.

The proximal portion of the ductus deferens is a component of the spermatic cord, which contains vascular and neural structures that supply the testes. The spermatic cord contains the ductus deferens, testicular artery and veins, lymph vessels, testicular nerve, cremaster muscle that elevates the testes for warmth and at times of sexual stimulation, and a connective tissue covering.

Ejaculatory Duct
Each ductus deferens, at the ampulla, joins the duct from the adjacent seminal vesicle (one of the accessory glands) to form a short ejaculatory duct. Each ejaculatory duct passes through the prostate gland and empties into the urethra.

The male urethra is divided into three regions. The prostatic urethra is the proximal portion that passes through the prostate gland. It receives the ejaculatory duct, which contains sperm and secretions from the seminal vesicles, and numerous ducts from the prostate glands. The next portion, the membranous urethra, is a short region that passes through the pelvic floor. The longest portion is the penile urethra (also called spongy urethra or cavernous urethra), which extends the length of the penis and opens to the outside at the external urethral orifice. The ducts from the bulbourethral glands open into the penile urethra.

The accessory glands of the male reproductive system are the seminal vesicles, prostate gland, and the bulbourethral glands. These glands secrete fluids that enter the urethra.

Seminal Vesicles
The paired seminal vesicles are saccular glands posterior to the urinary bladder. Each gland has a short duct that joins with the ductus deferens at the ampulla to form an ejaculatory duct, which then empties into the urethra. The fluid from the seminal vesicles is viscous and contains fructose, which provides an energy source for the sperm; prostaglandins, which contribute to the mobility and viability of the sperm; and proteins that cause slight coagulation reactions in the semen after ejaculation.

The paired bulbourethral (Cowper’s) glands are small, about the size of a pea, and located near the base of the penis. A short duct from each gland enters the proximal end of the penile urethra. In response to sexual stimulation, the bulbourethral glands secrete an alkaline mucus-like fluid. This fluid neutralizes the acidity of the urine residue in the urethra, helps to neutralize the acidity of the vagina, and provides some lubrication for the tip of the penis during intercourse.

Penis
The penis, the male copulatory organ, is a cylindrical pendant organ located anterior to the scrotum and functions to transfer sperm to the vagina. The penis consists of three columns of erectile tissue that are wrapped in connective tissue and covered with skin. The two dorsal columns are the corpora cavernosa. The single, midline ventral column surrounds the urethra and is called the corpus spongiosum. 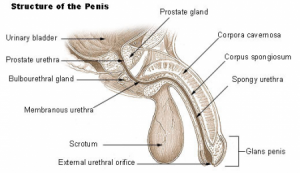 Male Sexual Response and Hormonal Control
The male sexual response includes erection and orgasm accompanied by ejaculation of semen. Orgasm is followed by a variable time period during which it is not possible to achieve another erection.
Three hormones are the principle regulators of the male reproductive system. Follicle-stimulating hormone (FSH) stimulates spermatogenesis; luteinizing hormone (LH) stimulates the production of testosterone; and testosterone stimulates the development of male secondary sex characteristics and spermatogenesis.